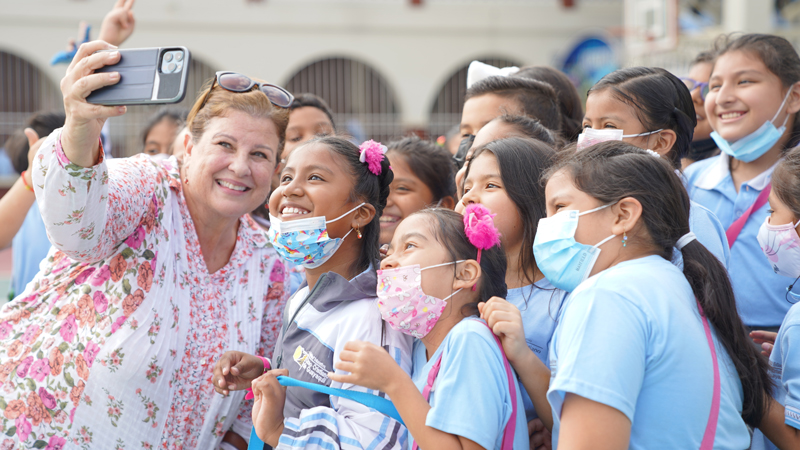 At Christmas time the story of the shepherds is my absolute favorite.

I love that the angel announced the birth of Jesus first to the shepherds who lived on the margins: “I bring you good news of great joy that will be for all the people.”

The message of Christmas is truly for all the people. It is for the shepherds and for the children living in impoverished communities throughout Latin America and the Caribbean.

I was reminded of this through visits to our schools this year, and meeting many sponsored children like yours. It is always an adventure to get to the schools. We travel on narrow winding roads, or maybe we dodge potholes, or drive on unpaved streets. My feeling is always the same.

At first I am a little sad seeing the communities, knowing that this is where the children live. But then, I enter the school and the atmosphere is so different.

Inside the schools, the children are loved and cared for, they are receiving an education that will help them break out of the cycle of poverty, and they are hearing the Good News of Great Joy about Jesus. Every single day!

You are truly bringing your sponsored child the good news of great joy for all people, and especially for the most vulnerable — the last, the lost, the least, the little, whom Jesus loves and came for.

The communities where ChildHope ministers are usually off the beaten path. They are not in the commercial areas of a city or near tourist destinations.

I have also had the opportunity to speak to so many former students who are now giving back, working in ChildHope schools as teachers and directors, counselors and pastors.

Their stories were all similar. The need was great in their homes. They felt hopeless and without a future. But at their ChildHope school, they heard the Good News of Great Joy. They learned about their Savior, Christ the Lord. And their lives were forever transformed.

One young man I met in Guayaquil is named Jairo. He is the oldest of five children who grew up in a neighborhood with streets that flooded into his house during rainy season. He said if there was one meal a day at home, that was a lot.

With tears in his eyes, Jairo told me that the opportunity to study in the ChildHope school in Guayaquil changed his personal story and that of his family.

“It allowed me to see things differently and taught me that it was possible to have a different life.”

Now Jairo works as a counselor in his former school, helping other students who are living in similar circumstances and sharing the Good News of Great Joy that transformed his life.

Give to the Christmas Fund