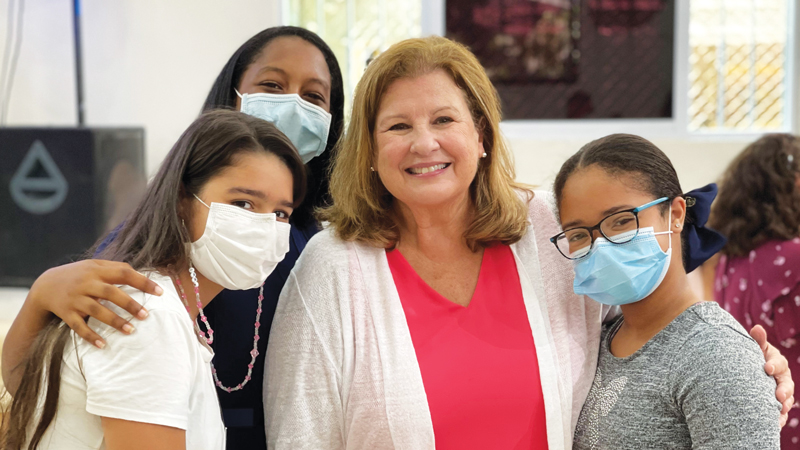 The Word became flesh and dwelt among us.

At Christmas we celebrate the birth of Christ … the Word of God that became flesh … Emmanuel, God with us … the Light of the World that shines in the darkness, and the darkness has not overcome it!

The Christmas story is filled with light and hope.

When the angel announced the birth of Jesus to the shepherds, the glory of God shone upon them as they heard the Good News of Great Joy, the birth of the Savior — hope for all people.

The wisemen followed the light of the star until it brought them to Jesus. The world that had waited in darkness, now had a newborn Savior who would be the Light of the World.

Recently, I was in the Dominican Republic at the Emmanuel School in Alcarizzos, the first ChildHope project in that nation. After church, I was able to meet many current and former students. It is a place filled with hope — shining the Light of the World into the darkness.

Many years ago, a widow with nine small children was looking for hope for her family after her husband died. She arrived in the community of Alcarizzos, where people from the local church reached out to help her.

They gave her a job cleaning the church and cooking for the school children. She was able to take food home each day to feed her own children as well. She was offered a sponsorship for one of her children at the Emmanuel School — and her youngest child and only daughter, Dalma, was chosen.

Dalma studied hard and was an exemplary student. She shared a uniform with her brother who studied in the morning … Dalma had classes in the afternoon. Upon her graduation she was offered a job at the school and worked as the sponsorship secretary for 14 years. Her own children also studied in the Emmanuel school.

Dalma is so grateful to her sponsors who provided this opportunity for her. In fact, she still treasures the last Christmas gift she received from them before she graduated. That’s how much you mean to your sponsored child. They will never forget your love for them!

Now Dalma works in the main ChildHope office in the Dominican Republic, processing all the sponsorships for the entire country! She takes children the letters from their sponsors and makes sure they receive their Christmas gifts. She is passionate about helping other children, who like her have been born into poverty.

Dalma says, “I put all my effort in helping these children, and the satisfaction I feel in being a channel for them is something that I cannot even explain. But my heart is very tied to this ministry, and I do not see this as any job but as a means that God has put in my hands to help more children in need of an education based on divine principles.”

Because Dalma’s mom found the Light of the World through the ministry of the church and the ChildHope school, a family was transformed. Their future was filled with hope. Now, Dalma gives that same hope to other children just like her … to God be the glory!

While in the Dominican Republic, I also met a man named Kwahydys (above, with his daughter). He came to me with a smile on his face and the light of Christ in his eyes and said, “All that I am is because of ChildHope.”

He was a student at the same school as Dalma. But there weren’t enough sponsors, so the ChildHope staff members in Dominican Republic pooled their money together to sponsor Kwahydys. As he grew in the Lord, they saw that God had a call on his life. So, they also paid for him to go to Bible School! Now he is a pastor. And his daughter is sponsored so she can study in a ChildHope school. Another life and family transformed by the Light of the World.

The Emmanuel school is such a wonderful example of the ministry of ChildHope. It stands as a tangible expression of Christ’s presence in the community, shining the light in the darkness and transforming lives — especially the lives of children born into poverty — with the Word that became flesh and dwelt among us.

Thank you for being a part of it through your faithful prayers and giving. Rejoice with us this Christmas in the beautiful work of the Lord through you.