Pastor Ramon Reynoso lives and serves a congregation in San Isidro, a community near the capital city of Santo Domingo in the Dominican Republic. His church is near an expanding area of growth adjacent to a military base. Scores of children live this community. There are no educational opportunities nearby. The area is filled with elements that create a really tough place for kids to grow up. Drugs, domestic violence that impacts families and hotels where you pay by the hour are part of what faces the children in San Isidro.

But Pastor Ramon had a dream that his church could serve hundreds of children in this area. They rented a house and started a school. It isn’t equipped as well as he would like,  but the children have no other options for education. This vision has begun small, but with this obedience “to a dream” this school in a rented house has begun to expand rapidly. 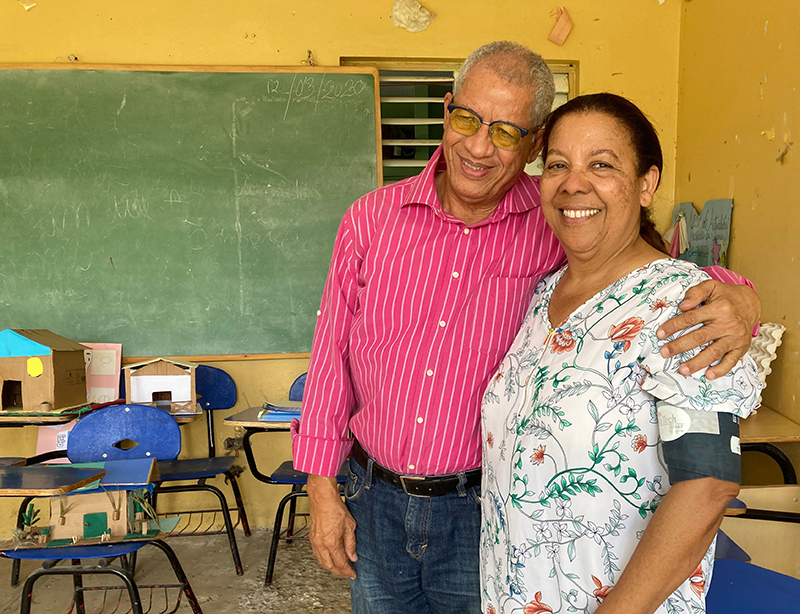 Pastor Ramon Reynoso and his wife Flerida in the 5 Loaves and 2 Fishes School in San Isidro, Dominican Republic.

This school hasn’t been started with all the usual accompanying equipment, but has  foundations built on obedience to God and a desire to serve children, even though a long term plan seemed a bit fragile. However, at the same time ( and unbeknown to Pastor Ramon) the God who gives dreams and responds to obedience, was connecting a church in Alabama to this story. This church was anticipating the time when this COVID season would wane, and their missions’ program could again become directly involved in serving needs across the world. They were looking for a location to focus their efforts and their funds as soon as travel would again be safe. Their funds were considerable and ChildHope was thrilled to be coordinating this effort.

However, the Spirit had further plans to exponentially impact San Isidro. This happened when a church in Massachusetts  heard of the opportunity in the Dominican Republic and a chance to  join the church in Alabama  in creating a fund that would match dollar for dollar for dollar  ChildHope’s fundraising efforts for this school.

And God is in this 21st century version of the Book of Acts. The name of the school in the rented house is 5 Loaves and 2 Fishes . The miracle of multiplication is alive and well. The miracle of multiplication continues as churches in Alabama and Massachusetts join together to impact the San Isidro community. The Holy Spirit is blessing Pastor Ramon’s dream for a place where the Gospel can gain a foothold in a community through providing an education for children. Churches in Alabama and Massachusetts  are part of a 21st century miracle of “loaves and fishes” that will bring a multi-story full equipped school to this needy community ready to serve hundreds of students.

Just as Paul and Silas sang songs at midnight in the jail in Philippi, can’t you almost hear the songs of hundreds of children in the  5 Loaves and 2 Fishes School singing praises to God in the community of San Isidro, Dominican Republic?

If you have a Bible phone app with audio, why not listen to the Acts 16:6-40  story one more time or read the story again. The Holy Spirit continues ministry like that recorded in this passage to this very day. It’s happening right now in the Dominican Republic with faithful servants like Pastor Ramon Reynoso joined by churches in Alabama and Massachusetts.

6 And they went through the region of Phrygia and Galatia, having been forbidden by the Holy Spirit to speak the word in Asia. 7 And when they had come up to Mysia, they attempted to go into Bithynia, but the Spirit of Jesus did not allow them. 8 So, passing by Mysia, they went down to Troas. 9 And a vision appeared to Paul in the night: a man of Macedonia was standing there, urging him and saying, “Come over to Macedonia and help us.” 10 And when Paul had seen the vision, immediately we sought to go on into Macedonia, concluding that God had called us to preach the gospel to them.

11 So, setting sail from Troas, we made a direct voyage to Samothrace, and the following day to Neapolis, 12 and from there to Philippi, which is a leading city of the district of Macedonia and a Roman colony. We remained in this city some days. 13 And on the Sabbath day we went outside the gate to the riverside, where we supposed there was a place of prayer, and we sat down and spoke to the women who had come together. 14 One who heard us was a woman named Lydia, from the city of Thyatira, a seller of purple goods, who was a worshiper of God. The Lord opened her heart to pay attention to what was said by Paul.15 And after she was baptized, and her household as well, she urged us, saying, “If you have judged me to be faithful to the Lord, come to my house and stay.” And she prevailed upon us.

16 As we were going to the place of prayer, we were met by a slave girl who had a spirit of divination and brought her owners much gain by fortune-telling. 17 She followed Paul and us, crying out, “These men are servants of the Most High God, who proclaim to you the way of salvation.” 18 And this she kept doing for many days. Paul, having become greatly annoyed, turned and said to the spirit, “I command you in the name of Jesus Christ to come out of her.” And it came out that very hour.

19 But when her owners saw that their hope of gain was gone, they seized Paul and Silas and dragged them into the marketplace before the rulers. 20 And when they had brought them to the magistrates, they said, “These men are Jews, and they are disturbing our city. 21 They advocate customs that are not lawful for us as Romans to accept or practice.” 22 The crowd joined in attacking them, and the magistrates tore the garments off them and gave orders to beat them with rods. 23 And when they had inflicted many blows upon them, they threw them into prison, ordering the jailer to keep them safely. 24 Having received this order, he put them into the inner prison and fastened their feet in the stocks.

25 About midnight Paul and Silas were praying and singing hymns to God, and the prisoners were listening to them, 26 and suddenly there was a great earthquake, so that the foundations of the prison were shaken. And immediately all the doors were opened, and everyone’s bonds were unfastened. 27 When the jailer woke and saw that the prison doors were open, he drew his sword and was about to kill himself, supposing that the prisoners had escaped. 28 But Paul cried with a loud voice, “Do not harm yourself, for we are all here.”29 And the jailer called for lights and rushed in, and trembling with fear he fell down before Paul and Silas. 30 Then he brought them out and said, “Sirs, what must I do to be saved?”31 And they said, “Believe in the Lord Jesus, and you will be saved, you and your household.”32 And they spoke the word of the Lord to him and to all who were in his house. 33 And he took them the same hour of the night and washed their wounds; and he was baptized at once, he and all his family. 34 Then he brought them up into his house and set food before them. And he rejoiced along with his entire household that he had believed in God.

35 But when it was day, the magistrates sent the police, saying, “Let those men go.” 36 And the jailer reported these words to Paul, saying, “The magistrates have sent to let you go. Therefore come out now and go in peace.” 37 But Paul said to them, “They have beaten us publicly, uncondemned, men who are Roman citizens, and have thrown us into prison; and do they now throw us out secretly? No! Let them come themselves and take us out.” 38 The police reported these words to the magistrates, and they were afraid when they heard that they were Roman citizens. 39 So they came and apologized to them. And they took them out and asked them to leave the city. 40 So they went out of the prison and visited Lydia. And when they had seen the brothers, they encouraged them and departed.