Our reading today is a very familiar story of Jesus’ miracle working power. He is teaching thousands of people who have flocked to hear him. Nobody seems to have planned ahead and it becomes obvious that folks are getting hungry. The only food available seems to be a small boy with a lunch of five loaves of bread and two fish. Jesus sees this as an opportunity to demonstrate his power in a way that will be obvious to everyone present.

Can you imagine being there on that day? If you are a disciple, you are worried but then become cynical as Jesus says, I have a plan! Imagine their attitude as they watched the bread and fish being distributed to the folks who are there. I wonder when it dawned on them that they were not running out of food. Can’t you just see them when their cynicism and embarrassment turns to joy as they distribute this food. People eat until they are full and still there is food left over.

For many of the children who attend ChildHope schools, the meal they receive at school is the only one they eat all day. At home, they are what we call “food insecure.” That is, their families don’t know where their next meal is coming from. Jan was a little boy who attended a ChildHope school in Nicaragua. Many days he would leave school knowing he wouldn’t eat again until lunch the next day at school. His parents simply didn’t have the money to regularly put food on the table for their family. One day Jan went to school hungry, as usual. But in addition to his usual school day meal, the school had provided a special collection of food for that would feed Jan’s entire family for days (see photo below). On seeing it, Jan’s mom was simply overwhelmed. To her, it was like the heavens had opened up to supply her family with what they needed at exactly the moment of her desperation. 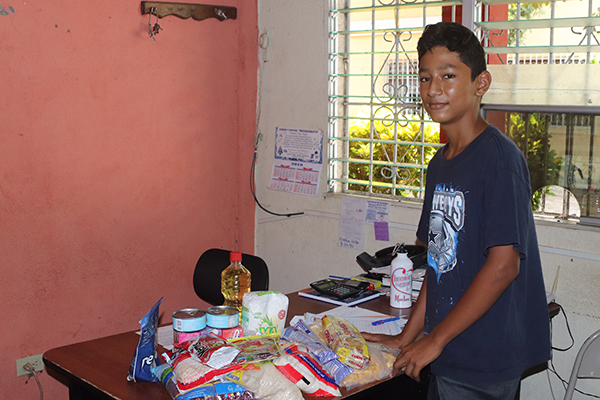 While Jan’s story doesn’t include the miraculous elements of the story in John’s Gospel, the reality is that for Jan’s family, this was every bit as miraculous as it was for the people on that hillside listening to Jesus. If you are a mom with no hope of feeding your family and your son comes home with a basket of food to feed your family, it does not take much to see the hand of God in that provision. That’s the God we serve: He knows the exact moment that our lives reach the breaking point and He intersects our hopelessness with Hope! Jesus did that for the crowd on the hillside; He did it for Jan’s family and be assured He’s looking beyond your need today with a miraculous answer that may surprise you!

Prayer:  Lord, I believe you are the miracle working God, help my unbelief that You can actually provide me the miracle I need today!

1 After this Jesus went away to the other side of the Sea of Galilee, which is the Sea of Tiberias. 2 And a large crowd was following him, because they saw the signs that he was doing on the sick. 3 Jesus went up on the mountain, and there he sat down with his disciples. 4 Now the Passover, the feast of the Jews, was at hand. 5 Lifting up his eyes, then, and seeing that a large crowd was coming toward him, Jesus said to Philip, “Where are we to buy bread, so that these people may eat?” 6 He said this to test him, for he himself knew what he would do. 7 Philip answered him, “Two hundred denarii[a] worth of bread would not be enough for each of them to get a little.” 8 One of his disciples, Andrew, Simon Peter’s brother, said to him, 9 “There is a boy here who has five barley loaves and two fish, but what are they for so many?” 10 Jesus said, “Have the people sit down.” Now there was much grass in the place. So the men sat down, about five thousand in number. 11 Jesus then took the loaves, and when he had given thanks, he distributed them to those who were seated. So also the fish, as much as they wanted. 12 And when they had eaten their fill, he told his disciples, “Gather up the leftover fragments, that nothing may be lost.” 13 So they gathered them up and filled twelve baskets with fragments from the five barley loaves left by those who had eaten. 14 When the people saw the sign that he had done, they said, “This is indeed the Prophet who is to come into the world!”