Mark’s account of this miraculous healing has always amazed me. It’s a story of friendship that goes beyond usual boundaries of camaraderie. We see persistence by friends who tear open the roof of a house to get an invalid in front of Jesus. The friendship and persistence of these men is simply stunning. 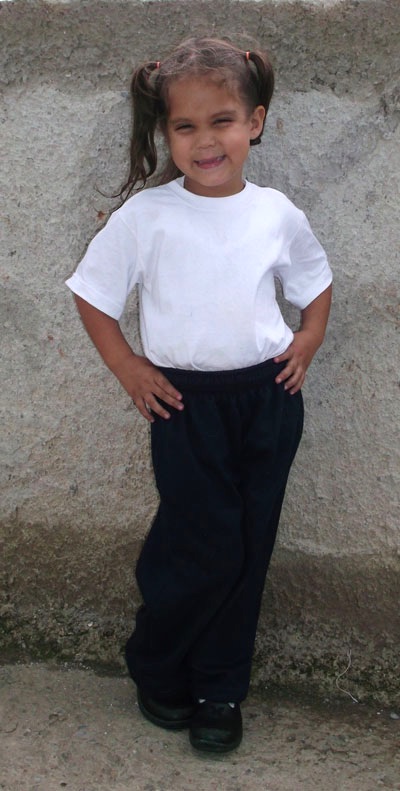 Those same qualities are part of a wonderful story of healing from one of our ChildHope schools in Venezuela. Adrianny (left) was nine years old when she became violently ill. She had a high fever and couldn’t keep any food down. The medicine that Adrianny’s parents could afford seemed to do little good.

After further doctor’s visits, It was then discovered that Adrianny had hepatitis. While this disease need not be fatal, the required treatment was simply beyond the financial means of Adrianny’s family. However, she had been taught, at her ChildHope school, that Jesus answered prayer. She began to pray fervently. Not only was Adrianny persistent in her prayers, but so were her classmates. Adrainny described it this way: “I began to talk to God, and He made me a miracle!”

Friendship and persistence in prayer were the common threads between the story in Mark’s Gospel and Adrianny’s story 2000 years later in a poverty-stricken barrio in Caracas, Venezuela. Just as Jesus honored the persistence of friends as they tore through a roof to lower their sick friend in front of Him, so the prayers of Adrianny and her friends received the same powerful response. Healing, transformation and hope filled each story and testify to us that the promise of Pentecost means Jesus is doing the very same things today as were recorded in the Gospel of Mark.

Prayer:  Lord, help me believe that the stories I read in the Gospels are not just true accounts of your ministry, but clear pictures of what you fully intend to continue doing in our lives.

1And when he returned to Capernaum after some days, it was reported that he was at home. 2 And many were gathered together, so that there was no more room, not even at the door. And he was preaching the word to them. 3 And they came, bringing to him a paralytic carried by four men. 4 And when they could not get near him because of the crowd, they removed the roof above him, and when they had made an opening, they let down the bed on which the paralytic lay. 5 And when Jesus saw their faith, he said to the paralytic, “Son, your sins are forgiven.”6 Now some of the scribes were sitting there, questioning in their hearts, 7 “Why does this man speak like that? He is blaspheming! Who can forgive sins but God alone?” 8 And immediately Jesus, perceiving in his spirit that they thus questioned within themselves, said to them, “Why do you question these things in your hearts? 9 Which is easier, to say to the paralytic, ‘Your sins are forgiven,’ or to say, ‘Rise, take up your bed and walk’? 10 But that you may know that the Son of Man has authority on earth to forgive sins”—he said to the paralytic— 11 “I say to you, rise, pick up your bed, and go home.” 12 And he rose and immediately picked up his bed and went out before them all, so that they were all amazed and glorified God, saying, “We never saw anything like this!”