The picture of Paul and Silas singing praise to God in the middle of the night has always amazed me. They had been accused of disturbing the peace, had been beaten severely and placed in the most secure part of the jail. The truth is, they had cast the demons out of a slave girl. She was a lucrative possession for her owners because she was a fortune teller. The owners were not very happy at the loss of their cash machine.

In the middle of this bad day for Paul and Silas, an earthquake opened all the doors to the jail. The jailor knew that the loss of prisoners could mean he himself might be killed. But Paul and Silas calm him, and he responds by asking the most important question any person can ask: “What must I do to be saved?” That day the jailor was saved and his entire household (everyone he was responsible for in his house) came to the Lord. 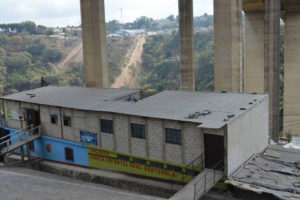 Entire households still come to Christ today. Hector (pictured above) is a young student at a ChildHope school in Guatemala. The school meets under a huge bridge that stands more than 400 feet high and crosses a ravine. The bridge is the favorite spot for hopeless people who come to commit suicide. Needless to say, the shack filled community, that lives under the bridge, is filled with tragedy and violence.

Hector’s parents were near divorce and Hector’s home was not a happy place. But in his Bible class he was taught that Jesus could transform the lives of every person. He told his parents what he had learned in his Bible class and invited them to the church near the ChildHope school. That day the entire family came to Christ and has been completely transformed. The words of Paul and Silas still ring true today, “Believe in the Lord Jesus, and you will be saved, you and your household.”

Prayer:  Lord give us boldness to speak the words that can transform broken families and save their entire households!

25 About midnight Paul and Silas were praying and singing hymns to God, and the prisoners were listening to them, 26 and suddenly there was a great earthquake, so that the foundations of the prison were shaken. And immediately all the doors were opened, and everyone’s bonds were unfastened. 27 When the jailer woke and saw that the prison doors were open, he drew his sword and was about to kill himself, supposing that the prisoners had escaped. 28 But Paul cried with a loud voice, “Do not harm yourself, for we are all here.” 29 And the jailer called for lights and rushed in, and trembling with fear he fell down before Paul and Silas. 30 Then he brought them out and said, “Sirs, what must I do to be saved?” 31 And they said, “Believe in the Lord Jesus, and you will be saved, you and your household.”32 And they spoke the word of the Lord to him and to all who were in his house.33 And he took them the same hour of the night and washed their wounds; and he was baptized at once, he and all his family. 34 Then he brought them up into his house and set food before them. And he rejoiced along with his entire household that he had believed in God.