Pentecost is the Greek name for the Feast of Weeks. This festival occurred 50 days (7 weeks) after the Passover. (See Leviticus 23:15-21 for details on the festival.) In the Old Testament, Pentecost (Feast of Weeks), along with the Passover and Feast of Tabernacles, was one of the 3 annual pilgrimages for God’s people. It was a harvest festival that marked the time that people brought offerings from their annual harvest. This rich Old Testament background serves as a foundation for the coming of the Holy Spirit and the passing of an old system of worship. What was now emerging was the fulfillment of promises that the Old testament had foretold.

Our reading today shows the broad spectrum of people who were in Jerusalem, specifically because this was one of the three annual festivals that was so central to their spiritual journey. It is to these people, who see the display of God’s promise on that special day, that Peter preaches and connects the promise of their spiritual heritage with its fulfillment on this special day of Pentecost (see v.16).

As we approach our yearly recognition of the Day of Pentecost 2100 years later, the words of Peter’s sermon should still strengthen us. No one is left out of the outpouring of God’s Spirit: men and women, young and old are all part of God’s plan to empower an army of witnesses. Since we are now part of God’s eternal purposes, we are given power from God Himself to continue His redemptive ministry. 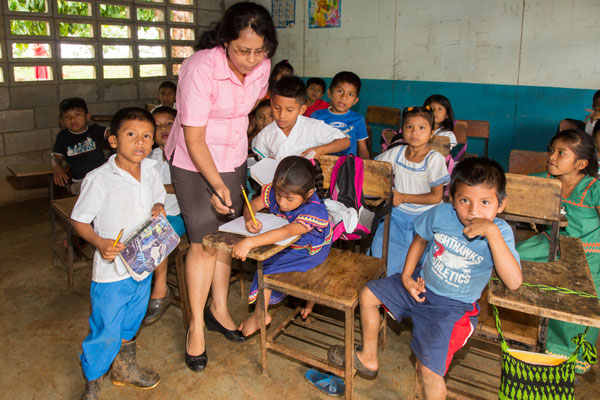 ChildHope schools rely on that Pentecostal power. It flows to our teachers, both younger and older; whether they are women or men. Their ministry to the students believes that “everyone who calls on the name of the Lord will be saved.” (v.21)

Prayer:  Lord, let me see the fulness of Pentecost come to pass in my life. Let this harvest celebration be a fresh outpouring of Your power in the place you have called me to serve.

9 And when he had said these things, as they were looking on, he was lifted up, and a cloud took him out of their sight. 10 And while they were gazing into heaven as he went, behold, two men stood by them in white robes, 11 and said, “Men of Galilee, why do you stand looking into heaven? This Jesus, who was taken up from you into heaven, will come in the same way as you saw him go into heaven.”

12 Then they returned to Jerusalem from the mount called Olivet, which is near Jerusalem, a Sabbath day’s journey away. 13 And when they had entered, they went up to the upper room, where they were staying, Peter and John and James and Andrew, Philip and Thomas, Bartholomew and Matthew, James the son of Alphaeus and Simon the Zealot and Judas the son of James. 14 All these with one accord were devoting themselves to prayer, together with the women and Mary the mother of Jesus, and his brothers.

15 In those days Peter stood up among the brothers (the company of persons was in all about 120) and said, 16 “Brothers, the Scripture had to be fulfilled, which the Holy Spirit spoke beforehand by the mouth of David concerning Judas, who became a guide to those who arrested Jesus. 17 For he was numbered among us and was allotted his share in this ministry.” 18 (Now this man acquired a field with the reward of his wickedness, and falling headlong he burst open in the middle and all his bowels gushed out. 19 And it became known to all the inhabitants of Jerusalem, so that the field was called in their own language Akeldama, that is, Field of Blood.) 20 “For it is written in the Book of Psalms,

“‘May his camp become desolate,
and let there be no one to dwell in it’;
and
“‘Let another take his office.’

21 So one of the men who have accompanied us during all the time that the Lord Jesus went in and out among us,