The healing of the lame man at the temple gate causes a big stir resulting in the arrest of Peter and John. They respond to the authorities arresting them by saying that, given what they had heard and seen of Jesus’ ministry, they were simply following His example. The arresting authorities are confounded by Peter and John’s response and release them from jail.

As they report to their friends what has occurred, Peter and John clearly see that they are facing some sturdy opposition. But their response is not fear but a fervent call upon God to give them boldness to face the approaching storm of opposition. Not only do they pray for boldness but a clear manifestation of signs and wonders. Their prayer results in a powerful outpouring of God’s presence with subsequent boldness in their preaching. 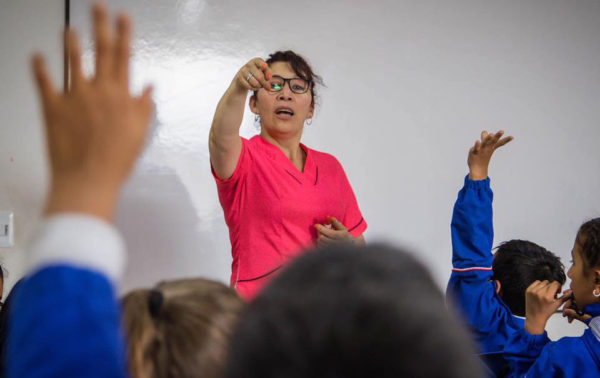 Teachers in ChildHope schools are 21st-century examples of Peter and John and their boldness in ministry. On multiple occasions I have heard teachers, who’s schools are in violent regions ruled by MS-13 gangs, tell stories of God’s protection. These are teachers with no extraordinary qualities other than they have been given boldness by the power of the Holy Spirit. While there is clear danger, the bold prayers of these teachers have seen the protecting power of God for ChildHope schools while gun battles rage on a regular basis. There is no other explanation for this supernatural protection than a contemporary example of the prayer of Peter and John in our reading today (v. 29, 30) “And now, Lord, look upon their threats and grant to your servants to continue to speak your word with all boldness,
while you stretch out your hand to heal, and signs and wonders are performed through the name of your holy servant Jesus.”

Prayer:  Lord, give boldness to ChildHope teachers in violent communities. Stretch out your hand and protect our schools, students and teachers!

23 When they were released, they went to their friends and reported what the chief priests and the elders had said to them. 24 And when they heard it, they lifted their voices together to God and said, “Sovereign Lord, who made the heaven and the earth and the sea and everything in them, 25 who through the mouth of our father David, your servant, said by the Holy Spirit,

“‘Why did the Gentiles rage,
and the peoples plot in vain?
26 The kings of the earth set themselves,
and the rulers were gathered together,
against the Lord and against his Anointed’—

27 for truly in this city there were gathered together against your holy servant Jesus, whom you anointed, both Herod and Pontius Pilate, along with the Gentiles and the peoples of Israel, 28 to do whatever your hand and your plan had predestined to take place. 29 And now, Lord, look upon their threats and grant to your servants to continue to speak your word with all boldness, 30 while you stretch out your hand to heal, and signs and wonders are performed through the name of your holy servant Jesus.” 31 And when they had prayed, the place in which they were gathered together was shaken, and they were all filled with the Holy Spirit and continued to speak the word of God with boldness.